Exhibit A: My Little Pony 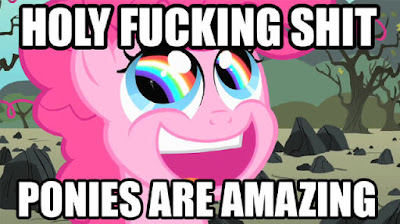 So, as a few of you probably know, a brony is an adult (and usually male) fan of My Little Pony (also known as MLP). Although the term is technically used to refers to fans of the entire franchise, most bronies became so with the Friendship is Magic (aka FIM) television series, and don’t care much about the toyline, so it’s acceptable to consider a brony a fan of FIM and not MLP as a whole. Now, full disclosure, I consider myself a brony. I’ll try to remain as objective as possible, but a few biases are probably going to slip by. Apologies in advance, and keep your salt ready, just in case.

Bronies have the (largely deserved) reputation to be rather… evangelical about the show, with some of them (me included) being quite aggressive in their promotion of it. This has led discussions of the series to be banned in many online communities because of how distruptive they are. And because of the tendency of humans to blame en entire group for the actions of a few of its members, many people have become quite critical of bronies as a whole. Which makes sense: how would you feel if someone tried to shove pastel colored equines down your throat? You’d have all the rights in the world to be pissed. There’s also people who think that adult men should not be watching a television show intended for young girls, and if they do, then something must be wrong with them, from retardation to pedophilia. So, naturally, this being the Internet, hatred abounds. Let’s talk about the flip side to the bronies: the anti bronies.

Now, this being the Internet, where trolls thrive, a few of the aforementionned pissed off people decided to focus their frustrations on creating hateful content targeting MLP. And they built entire communities of such haters, where they share said content, thus creating some sort of darker version of the brony online communities. One such group was the above /r/bronyhate, which got banned from Reddit after a few of its members went to vandalize MLP subreddits, a practice known as “raiding” (to be fair, bronies are also known for raiding anti brony subreddits from time to time).

Anti bronies also exist outside of Reddit. For example, on Facebook, there’s the “Anti Brony Coaliton”, which aims to “expose bronies and their fandom for what they really are as their fad fades away all on its own”. Although their page descriptions lists things that indeed exist (quite depressing, I know), you can’t to extrapolate such actions to all bronies. You see, bronies are a very loosely defined group. The only thing you can assume about them is that they like MLP. But they don’t like it in the same way, or for the same reasons, and they don’t express that preference in the same ways, so you can’t just make a blanket statement on the whole thing and call it a day. That said, reading the page, I have this sinking feeling that it’s actually maintained by fairly conversative people who think bronies are all child molesters. That, or trolls. Or both. Probably both. But anyway, they’re not worth much in the grand scheme of things, with their thousand likes versus 400,000+ for the official My Little Pony page.

It’s true that some bronies are asshats. And I’m fairly sure that at least one brony is a pedophile. Does that say anything about the group as a whole? If you thought “yes”, then I hope you’re not pursuing a career in science. And anyway, I’m not trying to excuse them. In fact, I think the brony community should try to do something about those, because they’re giving us a rather bad reputation. A core message of the show is “love and tolerate”. I translate that as “live and let live”. The guy in front of you does not give a shit? Then shut up about it. I’m sure you wouldn’t want to be pestered by his love for Breaking Bad or something.

So, what about hatedoms in general?

Haters are mostly trolls that focus their tactics on fans of a particular work. It’s very easy to get people angry simply by saying that a particular product that they like sucks. Bonus points if you make incredibly ridiculous claims and show shoddy logic. Fanboys will try to convince you of how “wrong” you are and waste a ridiculous amount of time doing so. Congratulations, you are an asshole. Hatedoms make sense because by grouping the trolls together, it’s easy to attract bands of fans that will flock to the those communities to argue, thus giving the trolls the attention they need. In short, why go the the fanboy when you can let the fanboy come to you?

There’s also another class of haters who dislike something so much that they spend a lot of time finding new ways to criticize it. I never really understood that behavior, as surely it would be simpler to just ignore the work in question and move on instead of sticking on it. Of course, if you think that the work is morally wrong (this is brought up regularly with violent video games), then you might indeed want to go on some sort of crusade to shut it down. But the whole issue of “morality” is a can of worms by itself, and I don’t want to go there. At least not yet. Maybe when I’ll need to fill my shit stirring quota.

As such, it’s best to simply ignore the haters, as what they’re doing is no different than any other form of Internet trolling. Then there’s crusader-class haters, who are slightly more troublesome to deal with as they’re serious, and will therefore keep fighting for much longer. I have no idea how to deal with those. I’ll think about it some more. But for now, let’s just ignore them as well.

As for MLP, give it a try, it’s good. And that’s the only piece of brony evangelism you’ll hear from me on this blog.

So, yeah, I realize this was mostly about MLP. Don’t worry, my next article on toxicity will be much more general (and probably devoid of any mention on ponies).